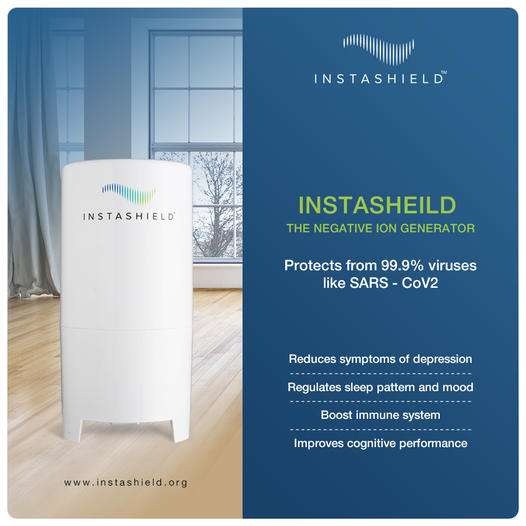 In this article, we are going to discuss some of the amazing benefits of negative ions and will also explain how Negative Ions generators help in creating positive vibes. Take a look!

Negative ions are found in abundance in the natural environment like forests, waterfalls, beaches, mountains, etc. and contrary to their names they have a positive effect on human health. These negatively charged particles are believed to elevate mood, reduce stress & anxiety, increase productivity, improve sleep cycles, etc. In addition, there are many negative ions antidepressant machines available on the market today that work on the principle of negatively charged ions generation to purify the air.

Negative Ions in the Air can Improve Mood, Reduce Depression and More

Negative ions are naturally occurring in the air and can also be generated by some electronic devices. Ionic air purifiers, ionizers, and other types of negative ions creators released negative ions in the air that have been shown to have a positive effect on mood. Additionally, using negative ion generators inside your home may help you feel better about yourself and your surroundings.

Negative ions have also been shown to reduce depression symptoms in those who suffer from the seasonal affective disorder (SAD), which is when people experience symptoms such as fatigue during winter months when there isn’t enough sunlight or bright light exposure outside their homes. A study published in 2011 found that patients with SAD who used an ionic air purifier had improved moods compared to those who didn’t use one at all!

Mental clarity is something that many people strive to achieve. It’s an elusive goal, but it’s also something that can be achieved with a little effort. Negative ions can help improve mental clarity by increasing blood flow in the brain, which helps oxygenate your neurons resulting in decreased drowsiness, higher alertness, and more mental energy.

Your chances of falling ill are high in regions rich in positive ions. This is because positive ions contain airborne allergens, pollens, and other impurities. On the other hand, an environment rich in negative ions induces a positive effect on your health by neutralizing the airborne impurities from that region.

Ionic air purifiers are a great way to create negative ions. These negative ion producers make you feel happier and more energetic by emitting negative ions that neutralize the harmful effects of bad air quality, like smoke, pollen, bacteria, allergens, etc. As a result, you can breathe easier and be more relaxed as well!

However, when choosing your negative ion generator, make sure it is of sufficient capacity (at least 50 litres) so that it can handle all your air cleaning needs. If possible, look for devices that also feature virus-slaying technology to kill viruses and germs from your room before they spread throughout your home or office space—this will keep everyone feeling healthy!

One such effective virus slayer is Insta-shield. It is equipped with a world-class virus attenuation technology that can protect you from all types of viruses and germs, including SARS-CoV2 with up to 99.9% efficiency in an enclosed space.

Negative ION Generators are portable, easy to use and affordable.

Negative ion generators are portable, easy to use and affordable. They can be used in the office, at home or in the car.

Negative ions are created when a high-voltage current passes through air molecules to ionize them. Air molecules then change from a static state to an ionization state: This creates what’s known as “ionospheric enhancement” and results in negatively charged and positively charged electrons creation in the air. And, as we all know, positive and negative ions are attracted to each other. They formed a bond and settled down on the surface.

Negative ions are an easy way to create a positive ambience in your home, and they’re also great for your mental health. Furthermore, you won’t have to spend a lot of money on buying negative ions creators—they can obtain for as little as $20! So, if you want to improve your home’s air quality and experience many incredible health benefits, consider buying one today.